The demand for full-stack developers is steadily rising and organizations require talented professionals who can work with both front-end as well as backend technologies. Because of this reason, there is an increase in full stack developer salaries around the world.

A technology stack also called technology infrastructure, is a list of all the possible technology services used to build and run a single application.

Having more people working on one project for different technologies results in more time spent in work allocation and communication, which proves costly for companies. Having a full-stack developer for a project decreases the number of people working under a project and ultimately the cost of the project.

This article attempts to shed light on what the global market expects and offers Full-stack developers.

Who are Full-stack Developers and what do they do?

Full-stack developers are experts who are proficient or at least familiar with both client-side and server-side programming.

They perform the roles of both front-end and back-end developers along with DevOps.

A full-stack developer is required to know how to program a browser, server, and database for the entire project. Some of the commonly used languages, frameworks, and tools are shown in the image below.

Full-stack developers aren't necessarily restricted to the type of languages used. Hence, based on the type of technology/frameworks used, they can be broadly categorized as follows.

A MERN Stack Developer uses MERN Stack, which consists of MongoDB, Express.js, ReactJS, and NodeJS. Unlike MEAN Stack, ReactJS is used for front-end development in a MERN Stack.

A Django Stack Developer uses Python Stack, which consists of Django, MySQL, HTML, CSS, and Bootstrap. Django is a free and open-source Python framework that is used for server-side web development.

Ruby on Rails, or just Rails, is a server-side web application framework written in the language, Ruby. A Ruby on Rails Full-Stack Developer uses a combination of HTML, CSS and JavaScript frameworks for front-end programming, MySQL or MongoDB for data storage and management, and Rails for backend development.

LAMP Stack uses the Linux operating system, the Apache HTTP Server, the MySQL database, and the PHP programming language to create web applications. For years it has been an effective solution to develop enterprise-level web applications with enhanced customization and flexibility.

It is very common to substitute other programming languages like Python, Perl, and even Ruby for PHP in LAMP Stack.

The LEMP Stack configuration is very similar to LAMP Stack. It only differs in the fact that LEMP Stack replaces the Apache web-server component with Nginx to increase the ability of the server to scale in response to demand.

Some of the primary factors affecting the salary of full-stack developers are listed below:

To understand how full-stack developer salary can change based on the above-said factors, we are going to consider data from India and the US.

Full-Stack Developer Salary based on Skillset

According to PayScale and Indeed, the best-paid skills for full-stack developers are proficiency or familiarity with Clojure, Go, Spark, GraphQL, and Tensorflow among others. 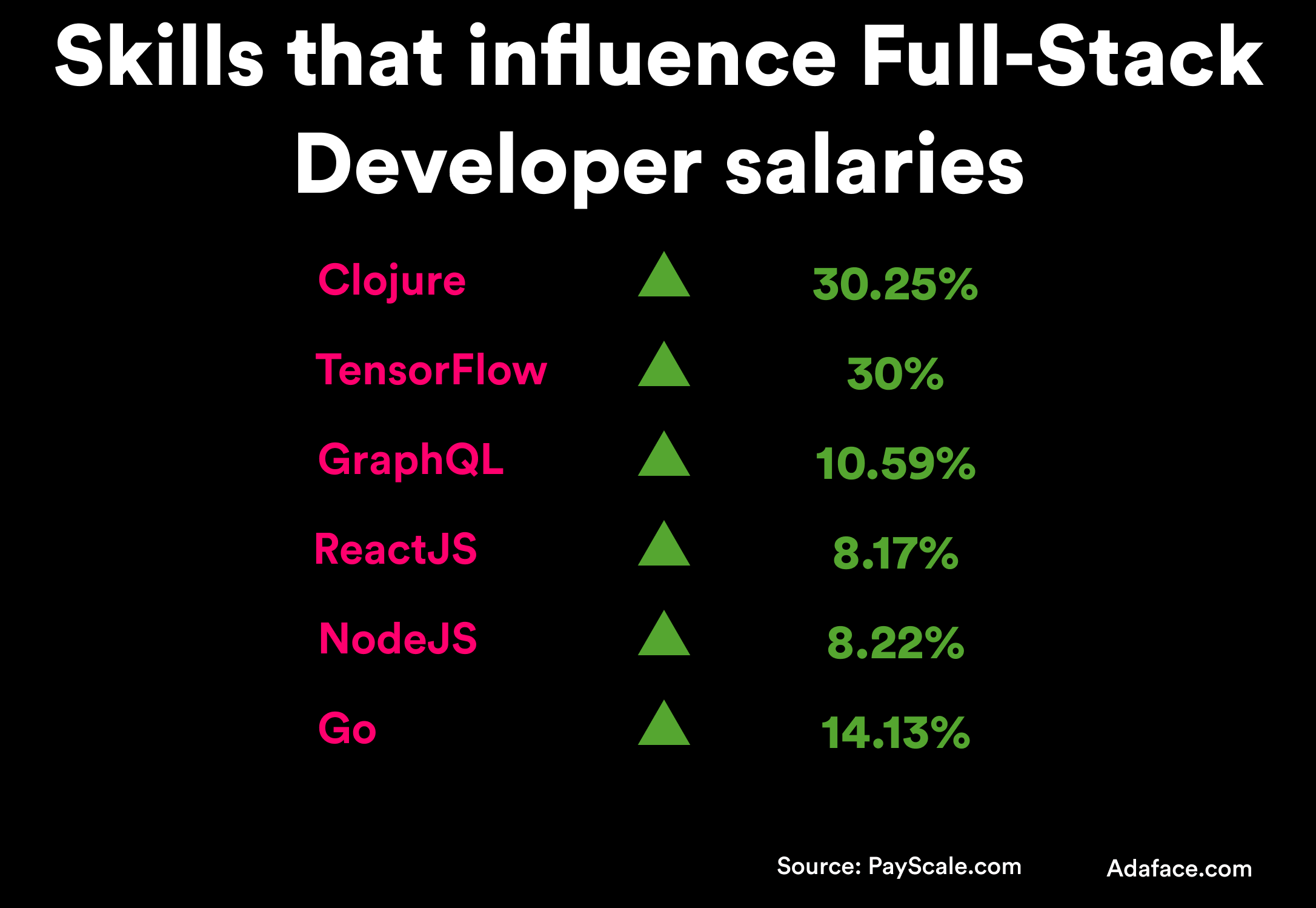 Full-Stack Developer Salary based on Location

💡 Pro-Tip: Use Front-End Online Test to assess the basic front-end development skills of a candidate.

💡 Pro-Tip: Use Backend Online Test to assess the basic back-end development skills of a candidate.

🔥 Hot-Tip: Use our Full-Stack Developer Job Description for your hiring needs.

🔥 Hot-Tip: Try our sample JavaScript questions to check your knowledge.